Everything You Wanted to Know About Super Nintendo Classic Mini
Melba Vasquez | 12 February, 2018, 12:20

"Nintendo" is always able to surprise their fans with a new console, an exclusive game, or shock news. The year 2017 stands apart, the March release of the new hybrid console Nintendo Switch spawned a lot of discussions, expectations of disappointments and admiration. In the autumn of 2016, the news about the re-release of the 8-bit NES console resounded in the world of the gaming industry. Sales of the legendary console were massive.

In the summer of 2017 "Nintendo" has announced the re-release of the legendary Super Nintendo. It is a successor of the old Super Nintendo that was first issued in 1990 and is being missed by a lot of fans. It is possible to download an emulator for the old console on https://romsmania.com/emulators/super-nintendo and play all of your favorite games.

What Is This New-Old "Super Nintendo Classic Mini"?

Game forums and social networks are filled with news about the release of the "Super Nintendo Classic Mini". Is it a new product, reissue, replication or a custom build? Let's try to answer this question.

The manufacturer of the console is neither a third-party developer, nor a partner company, but the "Nintendo" itself, so we immediately reject the option with a replica. Comparing to the models of the 90s:

●       the ability to connect to TV via HDMI output is added to the console;

●       all games, regardless of region, are in the 60-hertz picture, which is very convenient at present;

●       there is the possibility to run games, without using removable media, as the cartridges cannot play on the console.

It turns out that we have an emulator with a limited (at the moment) list of games released by "Nintendo" with the classic design and minor improvements.

To Buy or Not to Buy: That Is the Question

We are sure that this question arose in everyone's head after reading the news about the launch of the console. The Nintendo producers tried to include in the list of built-in games almost all the exclusive consoles from almost all genres of games. The total number of games built into the console is 21, 16 of which are the same for all regions and five games are exclusive to a particular area.

After the Scheduled Release

Having survived the shock, discarding the first impressions, including common sense, gamers formed a new pool of requests:

If to view statistics, the pre-order quota on SNES mini was snatched away in less than a couple of weeks. Many stores even opened an additional collection of orders for the second revision of the console.

The set of console differs from the classic: two joysticks on board for team play, USB power cable, HDMI wire for outputting images to LCD TVs and plasma, as well as manuals and advertising booklets. The size of the console is significantly reduced. The console can be placed in the palm of your hand, which is very convenient for its storing and carrying around.

It's nice that Nintendo has not forgotten its product after almost 20 years and it is twice as pleasant that discussions of games, passages, and descriptions of all games for the great console are going on again. Moreover, you can download roms for Super Nintendo and play as long as your heart desires. The Oruro carnival dates back more than two centuries and has been classified as a cultural heritage event by the United Nations. The blast happened on Saturday evening on a crowded side street close to the main parade route.

Asus to announce Zenfone 5 on February 27 at MWC 2018 Aside from the Zenfone 4 series it also launched other phones like the Zenfone AR, Zenfone Live, and Zenfone Max Plus. In any case, the device will be stripped down version of the ZenFone 5, in terms of specs and features.

Real Madrid Determined To Sell Isco This Summer Meanwhile, Hazard has on several occasions publicly said that he idolises the Frenchman. Have you asked the club to sell Isco? He a very good footballer.

Woodstock Corp Takes Position in US Bancorp (USB) ValuEngine downgraded Old National Bancorp from a "buy" rating to a "hold" rating in a research note on Tuesday, November 14th. The institutional investor bought 5,560 shares of the financial services provider's stock, valued at approximately $298,000.

To avoid a government bailout, the FTSE 100-listed lender raised £11.8bn from a number of investors in the Middle East. Money was pumped in by state-backed Qatari investors, as well as Abu Dhabi royals and investors from Singapore. 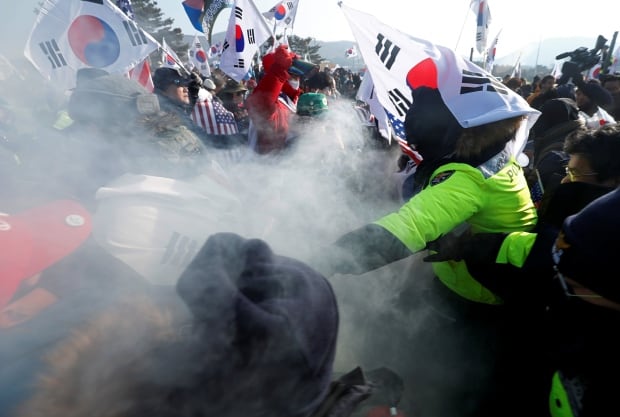 The South's Unification Ministry said steps to improve ties would be led by the two Koreas, but with the support of the worldwide community.

Parents of children with food allergies have also expressed disgust at the scene and the message it send to young viewers. It's not out in the United Kingdom yet, but over the weekend, the Peter Rabbit film opened in American cinemas. The White House response serves as a high-profile illustration of the obstacles many women face in speaking out about their abuse. Once photos emerged showing Porter's ex-wife with a badly bruised face, Mulvaney said, "he was gone nearly immediately".

International Olympic Committee President Thomas Bach called it "a very emotional moment", one that gave him "goosebumps". The North Korean pair were seated nearly directly behind the Pences, but there was no interaction between them.

The 18-year-old Muscovite was poised, polished and foot flawless in her short program to Chopin's Nocturne. She killed time in the beginning and then just jumped the second half.